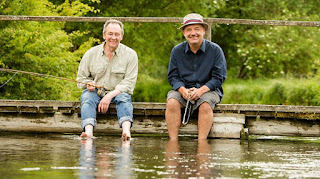 The much-loved, critically acclaimed and award-winning, Mortimer & Whitehouse: Gone Fishing has been commissioned for a fourth BBC Two series.
The most recent series, which finished on Sunday night, once again entertained the nation, bringing some much-needed cheer to BBC Two audiences. The series has consolidated at an average audience of 1.8m across the first five episodes to date (not including Sunday night's final episode), with viewers delighted to watch Bob Mortimer and Paul Whitehouse return to the riverbanks of the UK.
Patrick Holland, Controller, BBC Two, says: "With so many rivers left to fish, so many stories to be told, and so many new ways for Bob to fall over, it was inevitable that this glorious series would return. Thank you Bob and Paul for making a truly unique series."