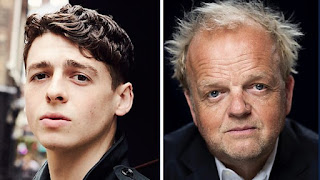 Filming has begun on BBC Two's Danny Boy (working title), a compelling new drama produced by Expectation about a young man's journey from medal-winning war hero to alleged murderer, and his search for truth in the fog of war.
Anthony Boyle (Ordeal By Innocence, The Plot Against America) plays real-life soldier Brian Wood, accused of war crimes in Iraq by the human rights lawyer Phil Shiner, played by Toby Jones (Marvellous, Detectorists).
The two men go head to head in a legal and moral conflict that takes us from the battlefield - at so-called Checkpoint Danny Boy - to the courtroom, and one of Britain's biggest ever public inquiries, the Al-Sweady Inquiry.