Eddie Hearn: No Passion, No Point podcast returns to 5 Live for series two 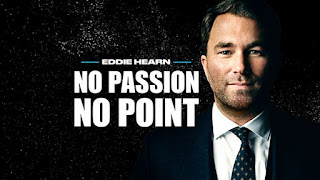 After a hugely popular first series, Eddie Hearn: No Passion, No Point returns to BBC Radio 5 Live and BBC Sounds for series two.
The podcast sees Eddie Hearn, one of the world's best-known sports promoters, go behind the scenes with some of the biggest names from the worlds of sport, entertainment and beyond.
Starting today, an episode will be released every Wednesday for ten weeks, with all episodes available on BBC Sounds.
Each episode sees Eddie talking to stars about what drives them on - future guests include Gary Lineker, Dina Asher Smith, Maya Jama, Ant Middleton, Frank Lampard and more.
Eddie Hearn says: "As things slowed down for everyone this year, I realised I'm not very good at twiddling my thumbs - so throughout the past few months, I've decided to reach out to some of the biggest names in sport, entertainment and business, who like me, lead non-stop lives. I got to talk to them about all sorts of stuff. Their passions, what gets them up the morning and how they dealt with the world grinding to a halt."
Kicking the series off with a bang, today's opening episode welcomes Liverpool defender, Premier League winner and 2018/19 PFA Player of the Year, Virgil van Dijk.
The supremely talented centre-back spoke to Eddie Hearn about a wide range of topics, including the importance of maintaining one's mental health and overcoming initial setbacks in his career.
The first episode of the second series of Eddie Hearn: No Passion, No Point with Virgil van Dijk is now available on BBC Sounds and BBC Radio 5 Live.