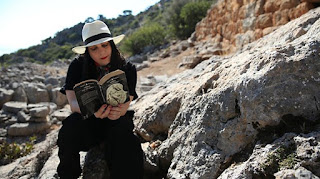 BBC Four has announced a second series of the hit travelogue Raiders Of The Lost Past With Dr Janina Ramirez.
The series, produced by the award-winning Northern Irish independent production company Alleycats TV sees Dr Ramirez head off around the globe in the footsteps of the world's greatest explorer-archaeologists, this second series taking us to the blue seas and ancient palaces of the Greek island of Crete to discover the truth behind the myth of the minotaur; the vast Konya Plain of Turkey to uncover the world's oldest city; and through the southern fjords of Norway to find the stunning Oseberg Viking Ship.
By following the trail left by each explorer, Janina brings to life the huge personalities and larger-than-life stories behind each find - and reveals the surprising fact that our understanding of each treasure is still shaped by the interpretations of these men and their eras, whether that's the height of the British Empire, or Europe in the grip of turn-of-the-century nationalistic fervour.
Emma Cahusac, Commissioner, BBC Arts, says: "BBC Arts is committed to bringing arts and culture into the homes of the nation throughout lockdown, and I am delighted that the Alleycats team have been able to make the next series of the much loved Raiders Of The Lost Past."
Ed Stobart, Alleycats MD, says: "Alleycats has huge expertise in international filming in challenging locations, which has stood us in great stead when we took on the challenge of safely shooting this series as the world came out of lockdown. We're delighted that at the moment when we're all in need of some inspiration, Raiders will take BBC and international audiences on a journey to see some of humanity's greatest achievements in a brand-new light."