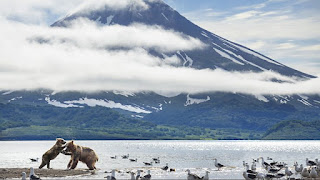 Sir David Attenborough's distinctive voice and an original score by award-winning composer Ilan Eshkeri feature in a new four-minute prequel, set against breath-taking scenery from the forthcoming new BBC One blue chip natural history series A Perfect Planet.
The 'sneak peek' prequel will be released globally on TV, social and digital platforms on 23 November at 2pm GMT ahead of the series, which will premiere next year around the world. This brand new series explores the great forces of nature that support, drive and enable life on earth.
The five-part series takes in awe-inspiring views, from lands drenched by the Indian Monsoon to the slopes of fiery Hawaiian volcanoes, from the tidal islands of the Bahamas to the frozen wastes of Ellesmere Island. Four years in the making, the series was filmed in 31 countries on six continents.
The first four episodes explore the power of volcanoes, sunlight, weather and oceans. The final episode in the series looks at the dramatic impact of the world's newest force of nature: humans - and what can be done to restore our planet's perfect balance.
Commenting on the prequel, Sir David Attenborough said: "This year perhaps more than ever, people are finding comfort and solace in the natural world. Whilst we may not be able to travel, we can take a few moments to enjoy our wonderful and diverse planet in this incredible footage."
Labels: Sir David Attenborough