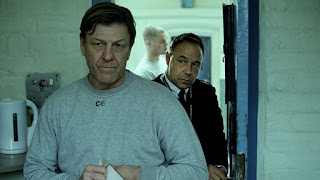 A first look image has been released today of Sean Bean as prisoner Mark Cobden and Stephen Graham as prison officer Eric McNally in BBC One's major new drama Time, written by Jimmy McGovern and made by BBC Studios Production.
Joining Sean and Stephen in the cast are Siobhan Finneran (Happy Valley, The Other One), Sue Johnston (The Royle Family, Downton Abbey), Hannah Walters (This is England, Pirates of the Caribbean), David Calder (The World Is Not Enough, The Hatton Garden Job) Nadine Marshall (Small Axe, Sitting in Limbo), Michael Socha (This is England, Being Human), Aneurin Barnard (Dunkirk, Thirteen), and Jack McMulllen (The First Team, The Souvenir).
Currently filming in and around Liverpool, Time has secured funding and support from the Liverpool Film Office through the LCR Production Fund.
A visceral, emotional and high-stakes portrayal of life in a British prison; Mark Cobden (Sean Bean) is consumed by guilt after accidentally killing an innocent man. Accepting his four year sentence and separated from his family, he meets Eric McNally (Stephen Graham), a caring prison officer doing his best to protect those in his charge. However when one of the most dangerous inmates identifies his weakness, Eric faces an impossible choice; between his principles and his family.
A story of guilt and forgiveness, punishment and penitence, both Eric and Mark are trapped by their pasts and unsure of their futures. Will they find the strength to move forward?