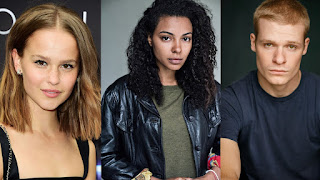 Sky today announces a new eight-part supernatural crime thriller The Rising which is due to begin filming in the Lake District next month, which is adapted from the Belgian crime thriller Hotel Beau Séjour.
The Rising is the first series produced entirely in-house from Sky Studios, Sky's production and development arm, who are working with executive producer Julian Stevens, producer of The Fall (BBC Two) and Informer (BBC Two).
The Rising is the story of Neve Kelly (Rugaard), who discovers that she is dead. She's scared and confused by this new existence. But, when she realises she has been murdered, she's furious. She's determined to find her killer and get justice, believing that it was someone she knew.
Impulsive and restless, Neve regrets never leaving her isolated community. And, as she comes to terms with her abilities, she begins to destabilise the lives of those she left behind. Particularly her estranged father, Tom (Daniel Ings) and her beloved mother Maria (Emily Taaffe).
Neve is a disruptive, unsettling hero who should not exist, and she needs to find her purpose. She takes us through the investigation into her death, going where the police can't. In the process she uncovers deeply buried secrets and is forced to re-examine everything about her life and the people she cared about.
With nothing to lose but time, Neve will push for the truth even when it hurts. Her return forces everyone around her to change, confess, or start covering their tracks. But, it also reveals that there are others like her out there…
With a distinctive tone and visual style, The Rising is a story about love, justice and the cost of pursuing the truth in a world that wants to keep it hidden.
The series is set to star a fresh line up of young emerging talent including Clara Rugaard (I Am Mother) as protagonist Neve, Nenda Neururer (A Brief History of Struggle) as the irreverent Alex Wyatt who has recently returned to the area after three years away and Solly McLeod (Boxing Day) as Joseph Wyatt, Alex's cousin and Neve's longstanding boyfriend. Daniel Ings (I Hate Suzie), Emily Taaffe (Rare Beasts), Alex Lanipekun (Spooks) and Robyn Cara (Ackley Bridge) are also set to star.