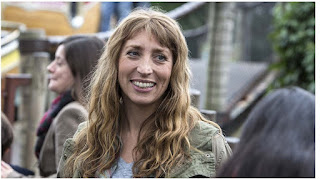 SHOWTIME announced today that the six-part second season of the critically acclaimed comedy series BACK TO LIFE, created by and starring Daisy Haggard (EPISODES, Breeders), will premiere on Monday, September 13 at 10 p.m. ET/PT with new episodes airing each week. All episodes of season two will be available on that day to stream and on demand for subscribers on SHOWTIME. From the producers of Fleabag, BACK TO LIFE follows Miri Matteson (Haggard) who, after 18 years behind bars, returns home and stumbles back into adult life in the coastal town she once knew. Miri continues to reconcile with her past while trying to assimilate and make a new life for herself post-incarceration.


Season two of BACK TO LIFE picks up three weeks after the season one finale, and six weeks after Miri leaves prison. She is optimistic about her future. Her probation officer, Janice (Jo Martin), has gotten her a trial shift at the supermarket, she and her neighbor Billy (Adeel Akhtar) have been spending more time together, and she's found her hair crimper. However, Miri's not talking to her mother Caroline (Geraldine James) after the revelation that she was having an affair with Miri's ex-boyfriend Dom (Jamie Michie), and she'll need a lot of shifts at the supermarket before she can afford to move out. She's also avoiding her best friend Mandy (Christine Bottomley) after learning that Mandy's secret affair with Lara's father, John Boback led to Lara's death all those years ago. Things are about to get a whole lot worse with the arrival in Hythe of Lara's mother, Norah. Still grieving her daughter, it's clear her presence will ensure Miri cannot escape her past.
BACK TO LIFE is produced by Two Brothers Pictures for SHOWTIME and BBC Three, UK in association with all3media international. The executive producers are Daisy Haggard and Laura Solon, who both wrote the series, Sarah Hammond, Chris Sweeney, Harry and Jack Williams, alongside Tanya Qureshi for BBC.