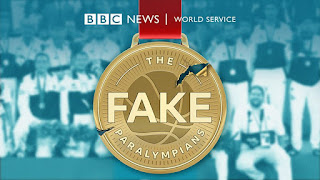 To coincide with the Paralympics taking place this year in Tokyo, The Fake Paralympians is a six-part documentary on BBC World Service in which British ex-Paralympic swimmer Dan Pepper investigates the cheats who won gold and left a devastating legacy for learning disability sport


Dan has a learning disability, and he says his sporting career was destroyed by the ban on intellectual impairment sports at the Paralympics; a ban imposed after Spain won basketball gold at the Sydney 2000 Paralympics with a squad of 12 in which - it later emerged - only two players were genuinely disabled.
In The Fake Paralympians, Dan sets out to find the truth about what happened and its impact on intellectual impairment sports. He speaks to people involved with the Spanish basketball team who won gold in Sydney, including the ex-captain of that team Ray Torres, who has a genuine disability. Dan investigates how the truth came out after a photo of the team celebrating their victory appeared in a Spanish newspaper, and what happened to those responsible.
Presenter Dan Pepper says: "I'm really excited about this series on the BBC World Service. I hope people learn that people with a learning impairment can do a variety of things - me presenting this show is obviously part of that. I'm hoping that people's views on intellectual disability sport will change, and I'm hoping to show what we've gone through to get to where we are today and where we would like to get to in the future."