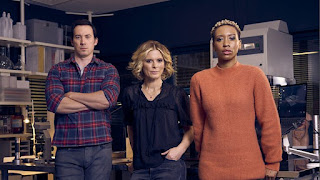 When Forensic Ecologist, Simone Tyler is asked by Nikki Alexander (Emilia Fox) and Jack Hodgson (David Caves) to help solve a murder, she questions whether her skills are the right match for The Lyell Centre. Simone feels more comfortable in the safety of an academic lab reconstructing ancient habitats, but her unique skills and lively personality could be exactly what the team needs.
On joining Silent Witness, Genesis says: "Simone Tyler is a zealous and meticulous ecologist who is making a massive jump from museum to the mortuary.
"It's been a lovely surprise to film a project during such a testing time, with so much to learn and sink my teeth into. It's really fulfilling to learn a new way of thinking and seeing through the eyes of Simone - as she learns, I learn. The science of forensics is very intricate work and it's been fun to play alongside the Silent Witness team. Watch this space!"
Lawrence Till, Executive Producer, BBC Studios Production, says: "It is a delight to welcome Genesis and integrate a new forensic specialism to Silent Witness.
"Forensic Ecology is the analysis of human remains, bugs, plants, soil samples and other particulates from crime scenes and is vital in proving the presence of a body and its deposition to establish a time and place of death. It is a great addition to the pathology carried out by Nikki Alexander and Forensic Science executed by Jack Hodgson.
"Genesis brings tremendous energy and enthusiasm to Silent Witness and plays Simone with a great sense of fun. I'm confident she will quickly become a much loved addition to the team."
Jo McClellan, Executive Producer, BBC One, says: ""We are very excited to be welcoming Genesis to the show, she brings such warmth and fun to the role of Simone, plus a unique specialism which allows Silent Witness to do what it has always done so brilliantly - evolve and engage in new ways so that is always fresh and ahead of the curve."