Tony Bellew and guests - including Ricky Gervais, Wayne Rooney and Joy Crookes - get angry in a new podcast for BBC Sounds 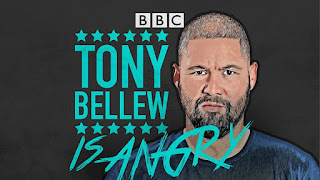 Ex-boxing world champion Tony Bellew will open up about the things that get him riled in new BBC Sounds and BBC Radio 5 Live podcast, Tony Bellew Is Angry


Being angry is no bad thing when you're a boxer, but now Tony's not punching people for a living he needs a new outlet.
Throughout the series he will go toe to toe with different guests as they talk about the times in their lives when they've been infuriated - from life-changing pivotal moments to the everyday stuff that aggravates us all. Tony will ask how they've dealt with it and what they've learnt, in the hope of gathering some tips on dealing with his own anger.
Tony says: "I've been fuelled a lot in life by anger, so looking back on why I've made certain decisions and why I've done the things I have was like therapy. I've really enjoyed listening to other people's stories and their experiences in dealing with anger. Hearing the things that make people mad has made me realise I'm not on my own, so for me it was good to get things off my chest and off my mind."
Tony Bellew Is Angry begins on 14 September with two episodes featuring Wayne Rooney and James English. Other episodes include Ricky Gervais and Joy Crookes, with more to be announced, as they share anecdotes of their anger through tears, laughter and rage.