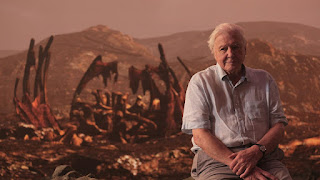 Dinosaurs: The Final Day, starring David Attenborough, a brand-new landmark documentary from BBC Studios Productions for BBC One and BBC iPlayer, will air later this year, according to BBC Factual.
Everyone believes they know what happened to the dinosaurs: An asteroid struck the globe 66 million years ago, near the conclusion of the Late Cretaceous period, and wiped them out. But that isn't the entire tale. While the asteroid impact itself is well documented, no concrete proof of how the dinosaurs were destroyed has yet been discovered.


A new dig site, however, promises to change that. Tanis is a secret prehistoric graveyard hidden in the low hills of North Dakota. There, buried in a peculiar crumbly layer of rock, are fossilised species from the very end of the Late Cretaceous. And they've been maintained in such detail that they could be able to help us get a better image of that period than we've ever had before.


David Attenborough says: "Dinosaurs were among nature's most extraordinary creatures, dominating the planet for over 150 million years before they became extinct."
"Tanis could be a place where the remains can give us an unprecedented window into the lives of the very last dinosaurs, and a minute-by-minute picture of what happened when the asteroid hit."