Life And Death In The Warehouse coming to BBC Three 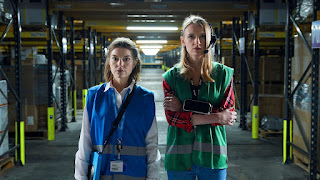 Life And Death In The Warehouse is an authentic exploration of working conditions in distribution centres, a world shrouded in secrecy where warehouse workers are subjected to a gruelling work regime and obsessive monitoring, from the Bafta-winning team behind Killed By My Debt and Murdered By My Father.


It chronicles the fictional storey of warehouse worker Alys, whose childhood friend Megan works as a trainee manager at the same distribution centre. Megan encourages pregnant Alys to increase her 'pick-rate' in order to keep her new job, putting Alys and her baby in danger.


A boom in online shopping has led to an explosion of warehouse jobs, with around a million people working in distribution centres across the UK. In many towns, warehouse work is now one of the few options available to young people.
In the 'customer-fixated' culture of distribution centres, 'idle time' (toilet breaks and conversations) and 'pick' or 'aspirational' rates (number of items picked per hour) are constantly measured with 24-hour surveillance, which can lead to disciplinary hearings and ruthless 'off-boarding' (sacking.) Pregnant women routinely fall below their target 'pick-rate' and are subjected to constant CCTV and algorithmic surveillance, 'self enhancement plans' and monitoring.
Written by new screenwriter Helen Black, the drama brings together an exciting cast of fictional characters which include Aimee-Ffion Edwards as Megan (Peaky Blinders, The Left Behind, Luther), Poppy Lee Friar as Alys (In My Skin, Ackley Bridge, My Name Is Leon) and Craig Parkinson as Senior Manager Danny (Line Of Duty, Doctor Who, Four Lions). Additional cast include Kimberley Nixon as manager Donna, Aled ap Steffan as warehouse worker Devon, and Sion Daniel Young as manager Sean.