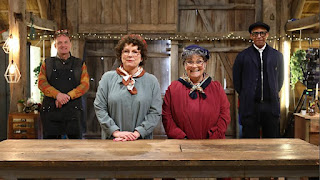 With no project too big or small for the team of craftspeople, they rarely have to turn away customers - that is, until Red Nose Day! Dawn French and Jennifer Saunders reprise their roles as 'The Extras,' attempting to get a free fix from the cast.
When the two wannabe TV stars encounter Jay Blades, and are looking for their five minutes of fame, things spiral out of control. When Jay realises they are more extraverts than extra-dedicated to having their prized possessions fixed, he dismisses them.
Meanwhile, Julie Tatchell and Amanda Middleditch get to work on a repair for another very special guest, showcasing their talent and skill.


Dawn French says: "I don't think we've ever said no to Comic Relief because it just is too important, and because it's from our community, and we were there right at the very beginning. I know that the money is spent correctly and I know that there are projects that are ongoing that need us to be ongoing and I wouldn't ever want to let anyone down. So I think the more that we can do to boost and support, the better!"
Jennifer Saunders says: "As I watched The Repair Shop I thought all I could ever see was these characters going into The Repair Shop, or me and Dawn pretending to mend something or imitating the characters. You know, I just thought, this is the show for us. Then Comic Relief said we've got The Repair Shop and it was like the perfect thing. It was so perfect!"
Jay Blades says: "I can't believe the chaos that those two caused! We're always surprised by what we see in the barn, but trust me, we've not seen anything like this in the barn before - you must watch it to see how funny it was. For fans of the show it's a real treat!"
Tune in from 7pm on Friday 18 March on BBC One