Filming begins on The Pact series 2 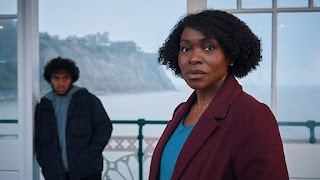 The BBC has commissioned a second series of blockbuster thriller The Pact, a co-commission between BBC Drama and BBC Wales, following the great success of the first.
Pete McTighe wrote and created the second series, which will consist of six episodes and tell a gripping and emotional story. This completely new drama introduces new characters to the cast, including Rakie Ayola (Anthony), a Cardiff-born Bafta-winning actor who also serves as executive producer. Little Door Productions, located in Cardiff, is in charge of the series' production.


The Pact, currently filming in and around Wales, follows social worker Christine (Rakie Ayola) and her family whose loyalties are tested when they're confronted by a stranger. Elizabeth Berrington (The Nevers), Lisa Palfrey (Chloe, Line of Duty), Christian Patterson (Mr Selfridge, In My Skin), Matthew Gravelle (Broadchurch, Keeping Faith), Aaron Anthony (Behind Her Eyes) and Jacob Ifan (Bang, A Discovery of Witches) join the cast. Plus, rising stars Jordan Wilks (Freshers), and Welsh talent including Lloyd Everitt (Casualty, The Deceived) Mali Ann Rees (Tourist Trap, Hidden).
Christine's family, oldest son Will (Lloyd Everitt), youngest son Jamie (Aaron Anthony) and daughter Megan (Mali Ann Rees), are trying to get on with their lives after the recent tragic death of their brother Liam. As they look forward to Megan's wedding, the family have their lives turned upside down when a stranger, Connor (Jordan Wilks), arrives in town claiming a connection that nobody could have imagined. As buried secrets come to light, they must consider who they are and grapple with morality and divided loyalty. As their lives spiral out of control, a terrible pact may be all that can save them.


The Pact is due to air later this year and is the second commission for Little Door Productions.