Inside No. 9 - Two New Series to come 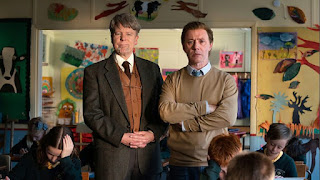 Inside No. 9, the critically acclaimed and BAFTA-award winning anthology series created by Steve Pemberton and Reece Shearsmith, will return for series eight and nine, with twelve brand new episodes commissioned and produced by BBC Studios Comedy Productions.


The news follows the series seven conclusion, Wise Owl, which aired on BBC Two at 10 p.m. this evening (Wednesday, June 1).
Inside No. 9 premiered in 2014 to widespread critical acclaim and a slew of prizes, including Best Scripted Comedy at the 2021 Bafta TV Awards. At the 2019 Bafta TV Awards, Steve Pemberton won Best Male Performance in a Comedy Programme, and the series has also won two Bafta TV Craft Awards, two RTS Awards, and a slew of other accolades.


Steve Pemberton and Reece Shearsmith say: "In the greatest plot twist ever, the BBC have commissioned another two series from us, taking "Inside No.9" to series 9. Since 2014, it has been the greatest gift to conjure these stories into being and we are thrilled there's still an appetite for more. What horrible surprises are there left to uncover? We remain as delighted and curious as you to find out."


Series eight and nine will stay true to show's anthology format with each series containing six brand new half hour films, each set in a different location. The style and tone changing each week, combining a different mix of horror, thriller, drama and comedy - always aiming to surprise, delight, unnerve and amuse.
Further information will be announced in due course.