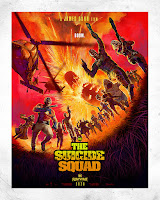 “It’s going to be different from any superhero movie ever made,” he means it! See more in this official first sneak peek behind the scenes of The SuicideSquad! DC Fan Dome

The Suicide Squad, also known as Suicide Squad 2, is an upcoming 2021 American superhero film based on the DC Comics antihero team Suicide Squad. Set for distribution by Warner Bros. Pictures, it is intended to be a standalone sequel to Suicide Squad and the tenth film in the DC Extended Universe.