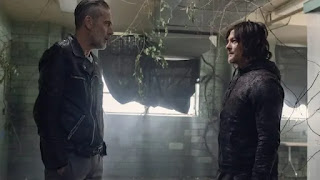 AMC+ will debut the first episode of The Walking Dead's highly-anticipated extended 10th season on Sunday, February 21 - one week ahead of its linear premiere on Sunday, February 28 at 9:00 p.m. ET/PT on AMC. All subsequent episodes will debut early on the premium streaming bundle, every Thursday prior to the episodes' linear premiere on Sundays, beginning March 4.
Last on The Walking Dead, we witnessed the fall of Alpha (Samantha Morton) and the end of the Whisperers War. The Kingdom had fallen, Hilltop was virtually destroyed and Alexandria abandoned to prepare for final battle. Our survivors were trapped and separated from one another. Yet, when faced with almost certain death, they rallied together to fight, killing Beta (Ryan Hurst) and eliminating the threat of the horde.