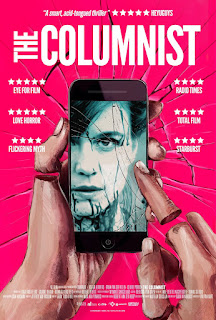 Starring Westworld's Katja Herbers, THE COLUMNIST, a stand-out at last year's FrightFest, is a savagely satirical, gory and wholly thrilling look at what happens when the victim of online abuse says "enough is enough".  Smartly scripted and slicky directed, with some wonderfully pitch-black set pieces, it sits nicely alongside women-turn-the-tables hits Prevenge, Revenge, Promising Young Woman, and the recent Danish release The Exception.
Featuring a fantastic performance from Herbers, and a scene-stealing Bram van der Kelen as the author of shock horror novels, THE COLUMNIST is sure to provoke debate around the prescient topic of social media's impact on basic civility. It's Death Wish for the online generation, and you'll be cheering as Herbers gets the next foul-mouthed victim in her sights.
Synopsis:
Newspaper columnist and author Femke Boot is suffering from writers' block, and her mood isn't improved by the torrent of abuse and death threats she receives daily on social media. When she discovers that her obnoxious, loud neighbour is one of the anonymous people posting vile comments, she snaps and takes matters into her own hands. As she finds herself able to write again, she sets out on a mission - track down the trolls and deliver some swift, polite and deadly vengeance.