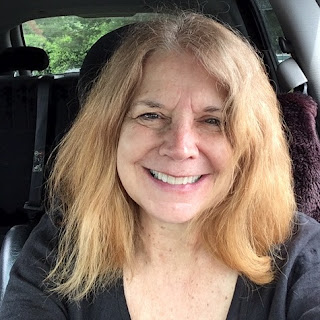 When did you first become interested in writing?
I've been a storyteller ever since I can remember. When I was a little girl, I was constantly entertaining (I use that term lightly; who knows how entertained they really were?) my family with made up "what if" tales. At night I might ask my mother, "What if when we're sleeping a ghost comes down the chimney?" Or in the car with my dad, when we would stop to fill the tank with gasoline, I might say, "See that cute little stray dog over there? What if I opened the car door and he got in with us and wouldn't get out?" Of course, then I'd launch off that question and explain all the things that might happen based on my scenario.
My parents were very patient and encouraging, though. In fact, my dad, the president of our hometown newspaper, had a lot to do with sealing my desire to be a writer. One evening, when I was four, I made up and shared a story about a squirrel who had lost her favorite acorn. When I went to bed, my father drove down to the newspaper office, typed up (yes, this was in the day of typewriters!) my story as best he could remember, found clip art of squirrels in one of the big advertising books, and hand-bound it into a booklet with a really cute cover. The next morning, he gave it to me. I was thrilled that I could now read and re-read (I was reading by the time I was four) my story, and share it with others. I'm sure my parents' eyes glazed over with my twentieth reading, but I didn't notice at the time.
How did you get involved in fantasy/horror?
I watched the original The Twilight Zone and original The Outer Limits on television as a kid. Scared me to death, but I couldn't get enough. I think the reason is this…the characters were, for the most part, people I could care about. These characters faced frightening and often overwhelming situations…sometimes they made it out okay, other times they didn't. And so, early on, it impressed on me the fact that horror, done well, could create and encourage sympathy and empathy. I really liked that. Also, these two shows tackled social issues that were often ignored during that time period. That was another big plus for me, another aspect of horror that steered me in its direction.