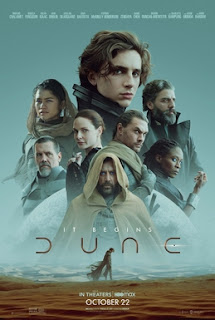 Dune is the kind of film that you will enjoy more on a second watching. I say that because the film itself is quite disjointed, and the characters in general are quite unlikeable, and the two characters you will take an interest in, those being Dave Bautista as Glossu Rabban, and Jason Momoa as Duncan Idaho, aren't in the film that much. I don't understand why you would have such big name actors, and then not really use them.
If you are unaware of the Dune story, Timothée Chalamet plays Paul Atreides, the heir of House Atreides. A brilliant and gifted young man, destined for great things. He has to travel to a dangerous desert planet called Arrakis, also known as Dune. This planet has a substance on it called "Melange", also known as "Spice". This is a drug that can give humans longer life spans, and increase brain capacity.
The drug is collected by huge machines that scrape the planets surface, of course life isn't so easy and there are giant sand worms that are a constant threat, as well as deadly storms.
After a betrayal Paul and Lady Jessica, played by the gorgeous Rebecca Ferguson cross the desert to find the Fremen, natives of the planet Arrakis who they hope will help them.