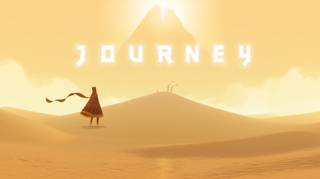 Journey is a hard to describe game, but "Indie-Adventure" seems to be the common description used. Co-developed by Thatgamecompany and Santa Monica Studio, it was originally released on PS3 back in March 2012, and then re-released in July 2015 for the PS4. It has since been ported to Windows and iOS in 2019.
You play as a mysterious robed figure, you find yourself in a huge desert, the only thing you know to do is head towards a mountain in the distance. You will see other players also on their own journey, but you can't communicate with them. As you play you will soon figure out that you need to "activate" seemingly dull pieces of cloth, into vibrant colourful ones. You will collect things that will allow you to jump, and almost fly for short periods, you will run along desert landscapes, and then find yourself almost surfing down the other side of a hill. When I say it is hard to describe, it really is.