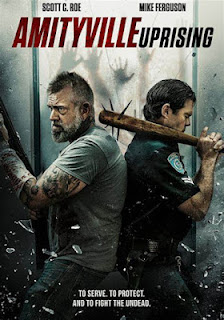 I seem to be reviewing a lot of B movies recently, the latest one to come across my desk is The Amityville Uprising, released by Lionsgate. Not sure why Lionsgate are making and releasing B movies, they clearly don't need the small change that this film would make.
The film starts off with some terrible CGI showing a chemical blast at a military base. The general idea of the story is that this strange blast, creates a cloud of toxic acid rain. Most of the story takes place at a police station.
Now as I have mentioned before, there are Good Terrible movies and Bad Terrible movies. So where does this one fit in. Well its tough to say. The film is roughly 80 minutes long, HOWEVER, here is an awesome life hack I am going to give you right now. You can watch the entire film in 40 minutes! All you need to do is fast forward the first 40 minutes, and then start to watch from there.