Set in World War 2, Fire and Steel is a proper old school arcade shooter, but instead of flying a plane, you control a young Dragon called Aiden, no idea who gave him that name, but it is not very Dragon like is it. A bit like calling a Doberman by the name Keith.
Anyway, Aiden has been asleep for a thousand years, he wakes up to find the world at war, not choosing sides between the Axis and Allied forces, Aiden decides instead to just breathe fire and kill anyone who gets in his way.
What results is a pretty cool game whereby you will find yourself breathing fire or shooting fire balls at everything, from people stood firing guns at you, to attack planes and helicopters, battleships, tanks, heavy artillery and everything else humanity has in a desperate attempt to stop you. Whether it is the Luftwaffe, RAF or the U.S Air Force, everything is open season for Aiden. 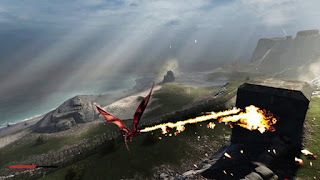