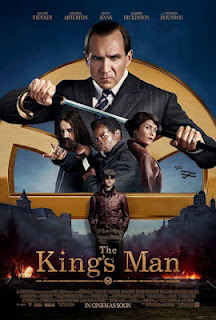 Although it has been out about a month now, I finally got round to seeing The King's Man, a prequel of sorts to the Kingsman film series.
The film has some big-name actors in it, Ralph Fiennes, Gemma Arterton, Rhys Ifans, Matthew Goode, Tom Hollander, Harris Dickinson, Daniel Brühl, Djimon Hounsou, and Charles Dance, and is set during World War I and covers the emergence of the Kingsman organization.
A collection of some of the worst "bad guys" from history have come together to plot a war to wipe out millions, and Orlando Oxford (Ralph Fiennes) is in a race against time to stop them.