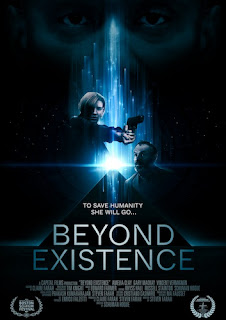 I am always weary of reviewing films I have never heard of, films that have apparently won awards that I wasn't aware of, and films with a super low budget.
Capital Films have been very honest that they had basically a zero-budget, but understand that there is a difference I think between films that are churned out as low budget films, and films that are made with love from a low budget. I would like to think that Beyond Existence comes under the latter of those two options.
Amelia Clay plays Ellen, a Government agent type, think FBI but in England, Detective Inspector Burnside but with a more serious side. She tracks down a character known as "The Professor" played by Gary MacKay, and sadly not Sergio Marquina. The professor holds a deadly secret, both literally and figuratively. Who is he, what does he want, and what does he have in his briefcase! Ellen is under orders to help The Professor, and it seems that there is an immortal bounty hunter (Vincent Vermignon) who is after The Professor.