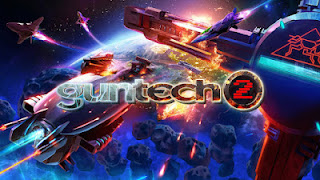 Utopos Space Station was the new hope for humans. It failed. Never underestimate human greed.
Your job is to clean up the mess. Fight alien life forms, rescue scientists, deliver vaccines to combat a deadly pandemic. The asteroid belt is filled with wild space aliens, many of them results of failed human experiments to create life that survives in space. You will even find a dragon in space!
As is often the case in such games, you fly about, shoot the aliens, get to the end point and on you go. This game has that but also a nice little twist. There is a virus pandemic affecting the solar system, and giant viruses the same size as alien rockets are floating around, and you need to take them out.
In normal times such a twist in a game would seem silly or pointless, but in current times it fits in just about perfectly. The viruses can even attach to your ship and drain your power. Along with the giant viruses and aliens, there are also demons, dragons and all sorts to fight.