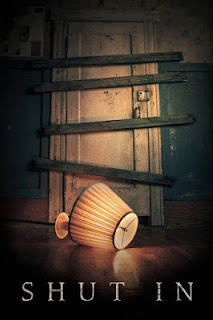 Former meth addict Jessica, (played by the fantastic Rainey Qualley) lives with her two young children, doing her best to survive with very little money, she wants to sell the family house that originally belonged to her Grandmother, so she can move away and start a new life.
By accident she managed to lock herself in her pantry, the heavy door was wedged open on a brick, and as she is inside, it comes loose and slams shut. Despite her best efforts, and that of her young daughter, Lainey, (played by the adorable Luciana VanDette), she remains stuck inside.
Unfortunately, it is at this time that Jessica's abusive drug addict ex Rob (Jake Horowitz) decides to turn up, along with his pedophile friend Sammy (Vincent Gallo) he lets her out at first, but after an argument, he throws her back in the pantry and nails it shut. He pushes a bag of drugs under the door too in the hope she will take some and revert back to being an addict like him.