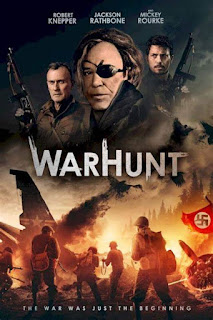 The year is 1945, a US military cargo plane has lost control and crashed behind enemy lines, deep in a German forest.
Major Johnson (played by the always strange looking Mickey Rourke) decides to send in a squad of top soliders on a top secret resuce mission, but not to rescue the lost soldiers, but to rescue the secrets that the cargo plane was transporting.
Leading the squad is the always impressive Robert Knepper as Sergeant Brewer, and make no mistake, for most of this film, Knepper is the star. Along with Walsh (Jackson Rathbone), the squad travel deep into the forest to look for the crash site.