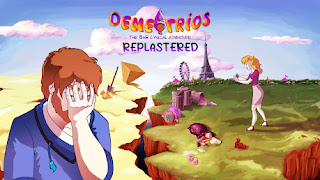 ​Demetrios is a quirky adventure game packed with tons of humour!
Bjorn Thonen, a slob of an antique dealer living in Paris, is robbed one night after coming home drunk. Forced to conduct his own investigation with the help of his neighbour Sandra, he ends up involved in a murky, mysterious affair. Will these unlikely heroes be able to rise up and discover ancient secrets?
Originally released on Steam, PS Vita, Xbox One, now the game gets a "REPLASTERED" 4K release on PS5.
Demetrios is a self proclaimed "Quirky" adventure game created by Fabrice Breton, and one look at the credits and you realise that Fabrice pretty much made the entire game himself, which is really impressive in this day and age. Well now the game is back once again on PS5 in stunning 4K, and I got my hands on it a week before release, because, you know, I am special. As a man in my early 40s, this is the kind of point and click adventure game I grew up on, back in the days of the Atari ST and Amiga. Where as kids of this generation will always prefer the instant gratification of blowing someones head off, I much prefer a little bit of work in a game before I get such gratification, well that or making my character put his fingers in an electrical outlet.