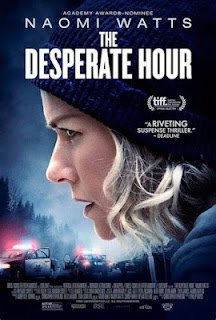 Naomi Watts stars as Amy in what is nearly a one-woman film. Directed by Phillip Noyce, The Desperate Hour tells the story of Amy, a mother mourning the death of her Husband. She lives with her kids, a daughter and teenage son Noah, played by Colton Gobbo. Her son is depressed, for obvious reasons, and the film starts off with her trying to get him out of bed to go to school.
Amy goes on her morning jog, as she is jogging, she is also answering calls, replying to texts, and so on. As she is jogging, a number of police cars pass her on the road, she thinks nothing of it until she gets an emergency alert on her phone.
There is an emergency at the school, someone has a gun and is holding people hostage. Amy is in the middle of the woods, and desperate to know if her kids are ok, her daughter is in elementary school and is ok, but she does not know if her son got to school, after some detective work, she finds out that his truck is there, so he is at the high school, where the situation is unfolding. Is he alive? Is he involved? What is going on?