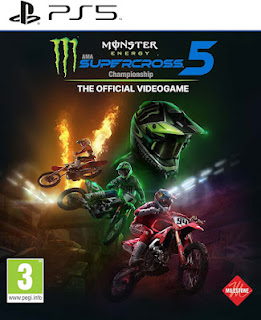 The latest Supercross game is here, and this one has a ridiculously long name, just like previous games. Monster Energy Supercross - The Official Videogame 5 will from this point on be known as Supercross.
For those who don't know, Supercross is a fancy name for Dirt Bikes, in other words, powerful motorbikes that race on dirt. This game takes the official 2021 championship, and allows you to play in it. All the official tracks, bikes and stars are here. It is about as complete as you can get.
The control system might seem a bit strange to new players to the franchise, it offers a twin stick experience, which although tough to get used to at first, quickly becomes second nature. You need to use both analog sticks to precisely control the rider, this is most important when it comes to the smaller jumps, but also while sailing through the air on a big jump, trying to get that extra bit of flight.