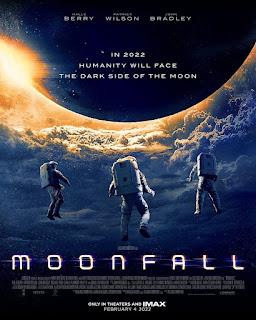 Seems like forever since I have seen a decent end of the world type film, so I have been looking forward to Moonfall from the moment it was announced.
Co-written, directed, and produced by the King of the disaster movies Roland Emmerich, just having his name attached to this film you know it will be good, but having his name attached to so much of the film, then it needs to be really good.
The film starts in 2011, Astronauts Brian Harper played by the always excellent Patrick Wilson and Jocinda Fowler played by the ageless Halle Berry, (How is she 55?) are on a mission to repair a satellite, Astronauts Harper and Marcus are on a spacewalk when suddenly a strange black swarm attacks their craft, Harper manages to get back into the craft, but Marcus is killed by the swarm. Harper takes control of the craft and gets him and Fowler back to Earth safely.
After an investigation, NASA dismiss Harper's description of what happened, and human error is blamed for the disaster. Harper finds himself out of a job when Fowler fails to back him up in the investigation.