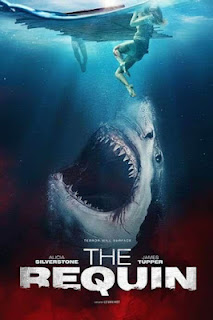 The Requin stars Alicia Silverstone as Jaelyn and James Tupper as Kyle, a married couple on a luxury holiday in Vietnam, they rent a cabin that floats on the water, we soon find out that Jaelyn recently lost a child in childbirth after she has a flashback upon seeing blood from Kyle's leg when he cuts it swimming.
Before you know it a Monsoon has hit the area, the fancy cabin breaks from the ropes holding it, and they start floating out to see, despite having a chance to climb on a rock relatively near to shore, they decide it is too dangerous with the waves, and stay on the cabin, which is now basically a raft. Day turns to Night turns to Day to Night, and they are stuck in the middle of the sea. Kyle has a broken leg, and blood has attracted sharks. And that is the basic premise of this thriller/horror film.
Alicia Silverstone is very screamy in this film, and James Tupper is the husband who can't do anything right.