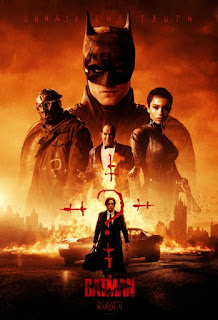 Do you remember A Nightmare on Elm Street (2010), when they tried to reboot the Freddy Krueger character and films, but took away everything that make him likeable? Well this is what they have done with The Batman.
First off, the story, Robert Pattinson stars as The Batman, we all know his history so pointless repeating it. A sadistic killer known as The Riddler begins murdering political figures in Gotham City. Detective Batman decides to investigate, and uncover the truth behind the corruption in the city and his own family's involvement.
Robert Pattinson does his best Batman voice, but never quite pulls it off. Zoë Kravitz as Catwoman has lost all of the sex appeal of previous Catwomen, don't get me wrong, she looks great, wears the nice outfits, but she has lost that something extra that Michelle Pfeiffer, Halle Berry, and Anne Hathaway all were able to portray.