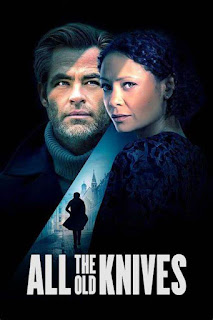 You know what 2022 needs? A good old fashioned American spy thriller, well luckily for you we have one in All the Old Knives, based on Olen Steinhauer's 2015 novel of the same name it stars Chris Pine as Henry Pelham and Thandiwe Newton as Celia Harrison-Favreau. Throw in Laurence Fishburne as Vick Wallinger, Jonathan Pryce as Bill Compton and David Dawson as Owen Lassiter and you have a pretty decent recognisable cast.
The film starts in early 2020 as CIA Officer Henry Pelham is told by his boss Vick Wallinger, that the CIA has reopened the case of a 2012 terrorist plane hijack, the Turkish Alliance 127 which ended in tragedy. It is believed that there was a leak from Vienna Station, where Henry Pelham and Vick Wallinger work. Pelham is sent to meet with a former colleague and lover in Celia Harrison-Favreau. They meet at a restaurant and discuss the events of 2012.