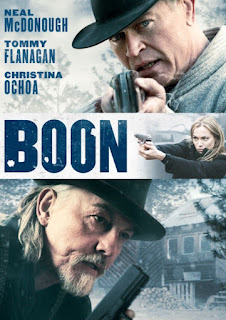 Neal McDonough is one of those actors who seems to pop up a lot, but never as the lead. You will instantly recognise him from Arrow, Legends of Tomorrow, and The Flash as well as Yellowstone and countless other TV shows.
Here though Neal McDonough stars as Nick Boon, a hitman with a heart trying to atone for previous evils. Yes, I know, it is a story that has been told countless times.
Boon previously worked as a hitman/mercenary for a crime syndicate, but he is on the run, and hiding out in a remote area of the Pacific Northwest. Straight away he finds himself being targeted, so ends up in a fire fight with someone sent to kill him, while killing the assailent, Boon is shot, he wakes up in a cabin after being found by a widowed pastor, Catherine, played by Christiane Seidel and her son.