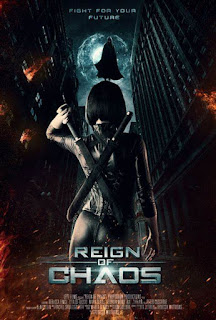 A low budget British Horror you say? Well I don't mind if I do Sir!
From Proportion Productions comes Reign of Chaos.
For centuries The evil God Chaos (Marc Seers) has been gaining power by infecting souls, "he escaped the realm of Chaos a void between Heaven and Earth, he defied the Gods of Ancient Greece, spreading diseases and blasphemous ideas of revolution, Olympus fell many centuries ago, as Zeus and his fellow gods faded like burnt stars, with no gods to wreak his vengeance upon, Chaos sought those crafted in Zeus's image, the humans." Now ignoring the timeline errors, which should be millennia and not centuries, the basic premise comes down to an evil plague set upon the human race, that turns people into "rabid creatures"
Only the descendants of Nike the ancient Greek goddess, (Nicole played by Rebecca Finch, Alina played by Rita Di Tuccio & Lindsay played by Georgia Wood) and not the shoe, can stop Chaos, and save the world. Chaos realises that he needs to destroy the Nike bloodline, to complete his total domination.