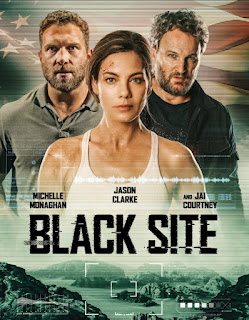 The last time I can recall seeing Michelle Monaghan in anything, was TV show Messiah, which sadly was cancelled after one season, well she is back now and leading the cast in new thriller Black Site.
Michelle Monaghan plays Abigail "Abby" Trent, she works as a CIA analyst. She recently lost her family to a terrorist attack in Istanbul, Turkey, and is still coming to terms with such a loss. Despite this she decides she needs to get back to work, so she can find out who was behind the attack.
Abby soon finds herself stationed at a secret underground black site facility that imprisons the worst criminals and the highest risk terrorists. Just before her new assignment is to begin, a special ops group bring in "Hatchet Meyers", played by Jason Clarke. He is notorious for the way he tortures and brutally murders his enemies, and Abby soon realises he is the one behind the attack that killed her husband and daughter.