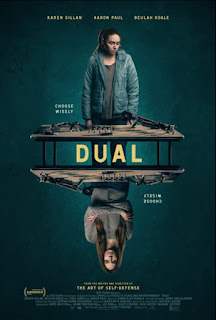 I've liked Karen Gillan since she played Amy Pond in Doctor Who and then more recently in the Guardians of the Galaxy films. So, when I heard about Dual, a sci-fi film about clones, I jumped at the chance to see it.
The film opens with a scene in a sports field, with two men fighting each other to the death, with an audience and a cameraman watching. One of the men stabs the other and as we pan out, we realise that the man on the floor looks identical to the man who just killed him. We quickly learn that the "double" (clone) won the fight, and the original is dead.
Set in what I assume is the near future, Sarah (played by Karen Gillan) is in a dull relationship with her boyfriend Peter (Beulah Koale), she is depressed and is drinking too much.  One day after a bad dream, she wakes up to blood all over her pillow and bed. She goes to the hospital and after vomiting more blood, she gets seen by a Doctor. After initial tests she is informed that she is ill and should go home and rest. Over Zoom, Peter informs her that she mistakenly gave his details to the Doctor, and that he has been told that she has a terminal disease. After going back to the Doctor and having it confirmed to her that she has 0% chance of survival, she arranges to have a clone of herself created, so that when she dies her clone can replace her, and then her loved ones wouldn't have to deal with the pain of losing her. 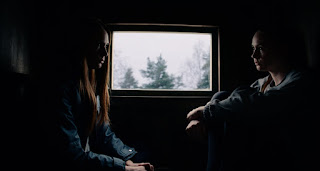