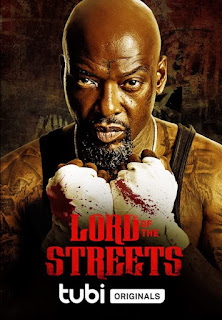 Jason Dyson (Anthony 'Treach' Criss) is a former MMA fighter, he quit after killing his opponent in the ring, and now he has a gambling and drinking problem, his wife and kid want nothing to do with him, so his life has pretty much hit rock bottom.
When he refuses to make his prized fighter throw an MMA match, notorious gangster Kane (Quinton Jackson) decides to collects his debt by killing the fighter and kidnapping Jason's daughter Stacy (Chanda Am). To get his daughter back he has to train a prisoner to win five fights in a row in an underground MMA cage.
The film comes across as a run of the mill, paint by numbers type of film, you have the former fighter whose life has hit rock bottom, a family who want nothing to do with him, but he still loves, and the big gangster wanting payment for a debt. It is all standard stuff