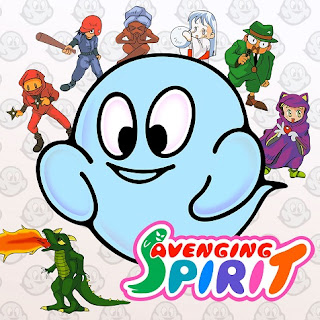 The great Ratalaika Games are back once again with another classic title. This time it is 90s cabinet arcade game Avenging Spirit by Jaleco.
Originally released in 1991, Avenging Spirit tells the story of a man who was out with his girlfriend Gennifer on a romantic walk, a crime syndicate killed the man and kidnapped his girlfriend. The man rises as a ghost or spirit and joins forces with his girlfriends father who is a paranormal researcher, and he now not only wants to rescue his girlfriend, but also get revenge on those who killed him. Ironically the crime syndicate is researching ghostly energy and their aim is to force Gennifer's father to help them and give them the secrets of the ghostly energy.
For a simple arcade game, that is quite the backstory!