REVIEW: How to Please a Woman (2022) Starring Sally Phillips 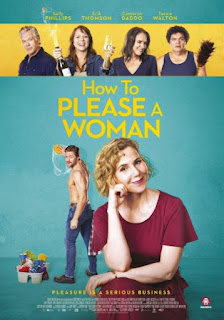 Let it be known before I start writing this review that I am a big fan of Sally Phillips and have been probably since her Smack the Pony days, so I might be a little biased.
Sally Phillips plays Gina, a middle-aged woman working in a middle management job, in a middling sexless marriage to a mid-range husband. On her birthday her friends arrange for a male stripper Tom (played by Alexander England) to turn up at her house and give her a show. She turns down the offer of "extras" but instead realising he is booked for 2 hours; she gets him to clean the house.
After being the only one made redundant and hearing that Tom's moving company is about to be closed down by the very same people who fired her, she remembers Tom cleaning her house topless, and the light bulb goes off in her head, turn the moving company into a cleaning company, with the gimmick being that men will clean topless and give frustrated women something to ogle. After Tom has sex with the first client, Gina soon realises that this could be an even better idea, men that will not only clean your house but also take care of those sexual frustrations.