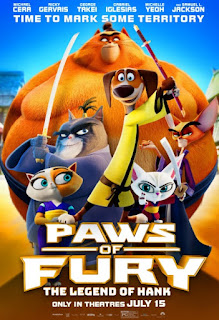 Paws of Fury is one of these films that seem to take forever to be released, originally due for 2017! And you can tell as there are a few slightly dated references, a big Gangnam Style number perhaps the most obvious.
Anyway, the film itself is a loose adaptation of the 1974 Mel Brooks film Blazing Saddles, and is full of big-name actors voicing the characters, including Michael Cera, Ricky Gervais, Mel Brooks, George Takei, Aasif Mandvi, Gabriel Iglesias, Djimon Hounsou, Michelle Yeoh, and Samuel L. Jackson.
Set in Japan and a land inhabited by talking cats, we are quickly introduced to Ika Chu, a warmongering Somali cat, voiced by Ricky Gervais and based on Hedley LaMarr from Blazing Saddles. Ika Chu is a high ranking official of Shōgun of Kakamucho, Toshi played by Mel Brooks, which is basically a version of Brooks' role as Gov. William J. Le Petomane from Blazing Saddles.
Ika Chu is the baddie in this film, and Ricky Gervais plays the character well, although I always think any time a well-known actor plays the part of a cartoon character, that character needs to look a bit like the actor, sadly in this film no one looks anything like the actor playing them, which is a bit strange, because young kids won't know who these people are, so they should have given adults something to notice.
Any who, Ika Chu has a big palace, and it is perfect, well almost, the problem is right next to the palace is the village of Kakamucho, and basically it spoils the view so Ika Chu wants it wiped out, so sends gangs of thugs to destroy it. The village has a Samurai to protect it, but flees when he sees the invasion.