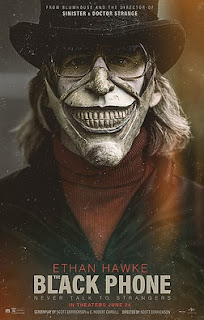 The Black Phone seemed to be released without much fanfare, but once it was released it has done very well at the box office, so I thought I would check it out.
Set in 1978 there is a serial killer on the loose known as The Grabber (Ethan Hawke), he has been prowling the streets of a Denver suburb abducting kids.
Finney (Mason Thames) and his sister Gwen, (Madeleine McGraw) live in that suburb with their alcohol father Terrence (Jeremy Davies) who also regularly hits them. Finney is getting bullied at school, but one day befriends another boy Robin, who gets into a fight with a bully and beats him up, Robin informs the bullies to leave Finney alone.
Gwen seems to be having psychic dreams, which we soon learn her mother also had, but which eventually sent her crazy, Gwen dreams of the kidnapping of another boy Bruce, who was friends with Finney, she sees black balloons in the dream, and when the local detectives find out about her dreams, they are intrigued as the information about the balloons was never released to the public. Although they are sceptical of her claims of the info coming from dreams. There is a great scene where they are talking to Gwen, and she is just being really sarcastic back to them. Highlight of the film for me. 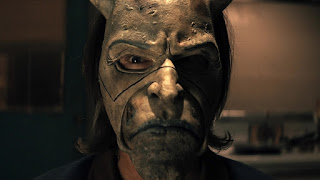