Over Many Martinis, Pierce Brosnan And Quentin Tarantino Discussed A James Bond Film That Never Came To Be 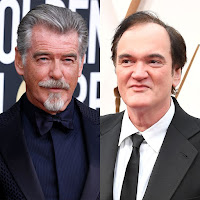 On last night's live watchalong of GoldenEye, Pierce Brosnan – the Bond with the kindest eyes – revealed much about the Nineties-era 007, and it seemed everyone wanted in on the star's turn on the Walther-PPK. Even Quentin Tarantino.

Long after the 1995 Bond hit wrapped production, Brosnan revealed that the director's people got in touch with his people to talk about a spy film that never came to fruition. But several rounds of martinis did.

"It was after Kill Bill Vol. 2, and he wanted to meet me, so I went up to Hollywood one day from the beach, and I met him at the Four Seasons," said the 66-year-old. "I got there at 7pm, I like to be punctual. 7:15 came around, no Quentin, he was upstairs doing press. Someone sent over a martini, so I had a martini, and I waited till 7:30, and I thought, where the heck is he? Word came down, apologies, so I thought, okay, I'll have another martini."