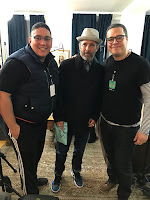 Jorgy Cruz’s “Funny Pains” follows stand-up comedian Wendi Starling, whose career, working process and life are closely examined in the film, as she navigates one of the entertainment’s toughest, most competitive professions - all during the height of the #MeToo movement, feminism, and the infiltration of stand-up comedy by the politically correct. Above all else, the film delves into serious issues of sexual assault and mental health, with Starling revealing her not-so-private personal traumas.

Tell us when and how you came upon the idea for the film, sir?
I kinda didn't, it just happened. I went to a bar my wife used to work at in midtown Manhattan and she told me about a comedy show they were having on a Saturday night and she was in charge of the event. I did not want to go, but she convinced me to attend. I was sitting at the bar chatting with my wife while comics did their thing and then all of the sudden this woman shows up looking like she hasn't slept in a while, she says hi and orders a glass of water. She seemed exhausted, and I asked her "are you ok?", to what she replied, "I went hard yesterday, I'm dying". Right there and then a comic named Manny Rondon introduces Wendi Starling to the stage, she put down the water and said "I'll be right back", Wendi hit the stage and she was full of energy, big smile and totally killed with a material so raw, so unique and personal that I was completely hypnotized and convinced I was in the presence of a special artist. Once her set was done she went downstairs to smoke a cigarette and out of the blue, I asked her if I could meet with her with a camera and shoot for a day. That day turned into years.