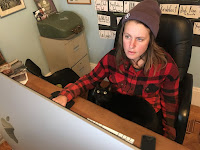 “I hope people walk away from this film with more empathy and understanding of what it means to be trans”, says Mary Hewey, co-director of Jack & Yaya, the highly-anticipated doc available On Demand June 19th from Freedom Cinema LLC.

Jack & Yaya captures a year in the life of childhood best friends who go from swapping gendered Christmas gifts as kids to transitioning in their twenties. The titular next-door neighbors grew up together in a rural area but were able to support each other when they learned they were both transgender.


How long of a journey has this been for you, Mary – from script to screen?

It’s a little hard to know where to start because Jack and I have been good friends since 2010, but it wasn’t until a number of years later that the idea of a documentary came around. The first little seed of an idea for the film started in December 2016, right after Christmas. I think I had just been talking to Jack, who was home in New Jersey with Yaya and his family for the holidays, and I was really struck by their friendship and so I just wrote down “Jack and Yaya documentary?” I revisited the idea with Jen, my partner, who had been working in film for since college, and after many long conversations, we decided to give the project a shot. Our original idea had been to do a short film, but we quickly found out that there was just no way we could cram thirty years of friendship into less than an hour.