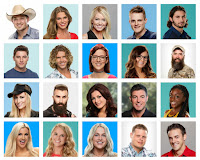 BIG BROTHER: ALL-STARS ups the game for season 22, as returning Houseguests vie for another shot at victory while living together in an "All-Star Loft" designed for the veteran VIPs. In a first for the hit summer series, the season premiere will air live, and the All-Star cast will be revealed during the two-hour move-in premiere event, Wednesday, August 5 (9:00-11:00 PM, live ET/delayed PT) on the CBS Television Network.

"The All-Star Loft is amazing!" said Allison Grodner and Rich Meehan, Executive Producers, BIG BROTHER. "It not only has an artistic nod to BIG BROTHER past, but this house actually holds the key to some new twists that will keep these All-Stars on their toes all season long!"

In the living room, the Houseguests will get literal "star treatment" with a gigantic wall full of 1,152 illuminated pegs, as well as a massive star field created from hand-painted rods, which pepper the backlit wall. The living room also features vintage star-shaped tin signage, as well as a sleek new model of the iconic BIG BROTHER chess set.