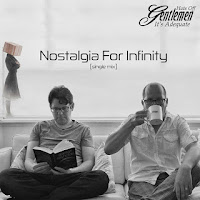 The song was inspired by Welsh science fiction author and former astrophysicist Alastair Reynolds’ Revelation Space novels. In this universe, humanity has fractured into competing factions defined by their relationship with technology, but all threatened by the Inhibitors, ancient machines aiming to preserve life in the long run, by destroying civilisations that become too intelligent.

Nostalgia For Infinity is named after the spaceship which becomes fused with its captain through the effects of the Melding Plague. As ship and captain progressively merge, it becomes architecturally more unpredictable and organic. The ship/captain, equally plagued by guilt at his past actions, withdraws from contact from his crew. The song is sung from the perspective of a character persuading the elusive captain to re-engage with humanity, by acting as an ark to preserve the species from the Inhibitors.